This is probably one of the most frequently asked questions from traditional archery enthusiasts, namely – should I go for a longbow or use a recurve bow? An easy answer would be that it depends on your needs and preferences, but in order to be able to decide what works for you, you’ll need to know what you’re looking at. And in this article we will do exactly that, look at the differences between these two types of bows, in the hope that you will find it more helpful to choose the better weapon of choice for you.

ARE YOU A HUNTER OR A WARRIOR? 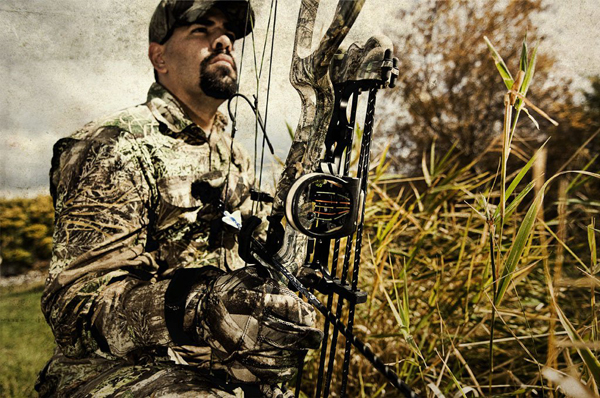 To begin with, we need to establish some historical facts that will shed light on the mindset behind the design of these weapons. Once you understand why a certain bow was made a certain way, and for what purpose, you’ll find it easier to figure out if it fits your personal style. Or, maybe, you’d like to go for a change and try out something new. It all depends!

A rough line can be drawn between the longbow and the recurve bow – rough because it doesn’t really aim for precision – but still a line because it helps establish some useful distinctions. Today, archery has turned into something different than what was before, with archery athletes brandishing compound, high-tech bows, competing against thousands of others at the Olympics and other competitions. While modern archery is still a formidable athletic discipline commanding respect in its own right, some feel that it has a certain clinical feel to it. This has been the reason for a resurgence of traditional archery, a discipline (and for many a hobby) that calls back to the roots of archery. Traditional archers dream of leaves crinkling under your boots, of the twang of the string and the feeling of raw strength in your hands. It is a call back to the wisdom, endurance and patience of the archer. To the thrill of the hunt. 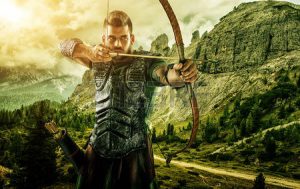 And the thrill of the hunt, historically, was often accompanied by the hum of the longbow. Dating back more than 11,000 years ago, hunting was basically the inventor of archery, which back then wasn’t a sport, but a valuable survival skill. The name says it all – it is indeed long (sometimes over 6 feet or 1.8m), and resembles a vertically elongated D shape. It was a way of life and a means for providing for one’s family, and it remained so for millennia. Much later however, it was replaced by the crossbow, which was in turn made obsolete by the invention of gunpowder. Be as it may, the basics of the design haven’t changed much for thousands of years – a bow is a stick with a piece of string attached to it. For all intents and purposes, most of the hunting bows through history resembled the longbow, and were primarily used for hunting. Many longbows were found in the tombs of noblemen and kinds, because a longbow of fine quality was often a person’s most prized possession. Besides being chiefly used for hunting game, the longbow also saw some military use – using the longbow, the English archers decimated their opponents during medieval times, striking fear in the hearts of their enemies. For many, the sound of a whooshing arrow was the last thing that they heard. 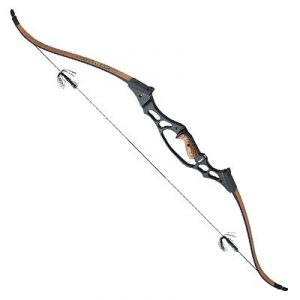 However, what about the recurve bow? Why was it invented, if the longbow was so fearsome? Well, precisely because the longbow evolved as a primarily hunting weapon. That meant that one usually took the time to position themselves, nock an arrow, aim… bide their time and then release the arrow at the unsuspecting animal. But not in warfare – such time-consuming process of aiming and shooting arrows was unfit for most of the battles, and soon everyone felt the acute need for some improvement in their archery department. The answer to that? The recurve bow. Enter 2,000 BC, when the Asian warriors sat down and took a good hard look at their bows. By a stroke of genius, it was decided that a slight variation in the design would vastly improve the arrow speeds and ease of using a bow. So the “curve” was introduced – the curved upper and lower parts of the “D” were now given another curve forwards, hence the name “recurve bow.” We could say that the recurve bow resembles a “3” shape, which, unlike the really long longbows, was actually more compact and could be transported and wielded more easily. One notable example of recurve bow use was the Mongolian archers on horseback, who could even shoot arrows with high precision turned back on their horses – the trick was to release the arrow then the horse was in the galloping phase, and had all four hooves off the ground. Even though the mastery of the Mongolian archers is undisputed to this day, it would have been impossible had they used longbows to do that.

DESIGN OF THE LONGBOW 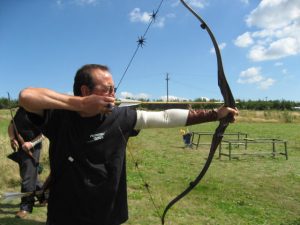 As we mentioned before, the longbow is longer, flatter, thinner on the side but thicker in depth from recurve bows. This sturdiness of the longbow makes them more forgiving to use, since the length and stiff construction of the bow eliminates most of the shake. The shake can be produced if an archer moves their arm sideways, thereby introducing torque on both the string and the actual limbs of the bow. Needless to say, this would result in very imprecise arrow shooting, but the structure of the longbow eliminates most of that. Additionally, longbows have straight grips, and the overall design is more stable than that of the recurve bow, and makes the arrows fly straighter.

Furthermore, another factor that makes the arrows fly straighter is the length of the bow. This creates less pinching on the fingers when you draw the string all the way back, so there is less friction during release. Longbows generally make good learning bows, so if you’re starting out with archery, you should probably get yourself a longbow. In short, longbows are slower to use but more precise. They are usually made of yew wood, elm wood, ash wood and so on.

There are three basic variations of the contemporary longbow:

DESIGN OF THE RECURVE BOW 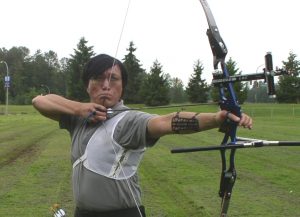 As we mentioned briefly above, recurve bows are generally smaller and lighter than longbows, and if the longbow resembles the letter “D”, then it could be said that the recurve bows resemble the number “3”. The limbs of the recurve bow bend the classical half-moon shape of the longbow forwards again, creating an impression of horns in a sense. This design allows for more power to be packed in a smaller package, which in turn makes for much faster arrow shooting. Which is one of the reasons why most hunters today prefer the recurve bow, ironically, since the longbow was the hunter’s weapon of choice for millennia before. Continuing with the design, another comparative difference from a longbow is that recurve bows are much thinner in depth, but wider, which however introduces problems into the shooting process. The thinness of a recurve bow’s limb allows for a much greater “swing” if you torque the limbs while pulling the string, which makes it a less precise weapon than the longbow. However, the shorter length and shooting speeds of these bows can compensate for this in some scenarios, like tighter spaces or a more densely wooded area (medium to short range). Traditionally, people used laminates and composite when constructing recurve bows, as a way to strengthen their structure.

When shooting, you’ll notice that the recurve bow’s string touches the limbs of the bow, while the areas of contact between string and limbs in the longbow is much smaller. This means that the string in the recurve bow is getting pulled slightly farther back, relatively speaking, which makes up for the greater arrow speeds. But, again, at the expense of precision.

There are three types of recurve bows: 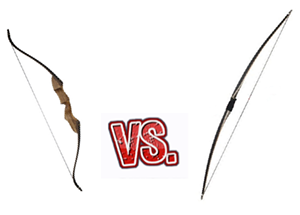 As far as we’re aware, there is no scientific consensus on which bow is better to use – the longbow or the recurve bow, so you, dear reader, will have to choose on your own. It goes without saying that both the longbow and the recurve have their positives and negatives. But let us do a re-cap:

In short, the longbow is by far the more forgiving weapon to use, more precise, and easier to learn archery with. It allows for less shock on the fingers too, and less torque when pulling your arrow before release. There are three types of longbow you can choose from: the “Stick” type of traditional longbow, the “Laminate” longbow design (lighter and more durable), and the “Reflex/Deflex” hybrids between the longbow and the recurve bow design. The longbow was a hunter’s weapon – it came first, before all other bow designs in the history of mankind, and as such is an ancient weapon.

In short, it can be said that recurve bows are smaller, can shoot faster and enable for a greater mobility in areas like the woods. The three variations you can choose from are the Basic recurve bow, the Takedown recurve bow, and the Composite recurve bow, which nowadays is little less than a historical curiosity but is worth the honorable mention. Furthermore, some of them can be disassembled, which is very convenient if you have to be moving a lot. Historically, recurve bows originated with the Asian warriors.

If we can allow for a questionable analogy to be made here – the recurve bow is like a machine gun, while the longbow is like the sniper rifle. Each will get the job done if you use them right, and in the appropriate context. And, if your means allow you to, get one type of each because using each of them is a joy. No two bows are alike (even from the same class and type), and every bow has to be adjusted to its specific owner so chances are you won’t make a mistake whatever you choose. Traditional archery can be one of the most exhilarating, fun and relaxing outdoor activities that you will ever take part so do don’t miss on taking your shot at it.