The Martin Diablo is an advanced takedown recurve with an open riser that will work well for both a beginning and a seasoned archer. It can be used both for target shooting and hunting.

It is barely a year old so durability is still up in the air a bit, but Martin bows are generally considered durable.

The Diablo is one of the most efficient bows around so it makes the most of whatever poundage you shoot, the arrow is faster and the range greater than with other bows of a similar weight. While not cheap, it is underpriced for its quality.

In common with most Martin take downs, the rest and string are weak on the Diablo. Also the Diablo was released in 2013, so all the possible bugs haven’t been widely circulated yet. 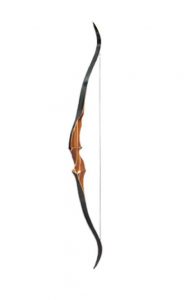 The Martin Diablo is a highly advanced takedown recurve, featuring a modern, advanced technology that makes it one of the most efficient bows on the market. What this means to the archer is that more energy is transferred to the arrow so that it will fly faster and further than arrows from another bow of the same weight. This is particularly important to the new, or beginning archer in that the draw isn’t as heavy to produce better results.

The Diablo comes with wood and fiberglass laminated limbs which are serviceable but a bit less than the hi-tech riser can handle and Diablo owners are happier trading them out for carbon. Martin limbs are known for durability and this isn’t a knock on them so much as a heads up that the riser can handle more.

The technically advanced riser on the Diablo features a “bridged riser” which is basically a groove in the riser outlined with carbon. The open design for the riser greatly reduces vibration and excels at transferring as much energy to the arrow as possible.

The Diablo accepts almost all accessories and is drilled to accommodate them. You can add a sight, stabilizer and quiver to the bow at any time, and a bowfishing rig is also an easy hook-up. The hook up for the sight has the best placement of any Martin bow.

When you pair the Diablo with appropriate limbs it is an excellent hunting bow, although it should be noted that the Diablo has had only one season in the field. The power and accuracy of the Diablo can extend a hunter’s zone by as much as ten yards.

The Diablo is moderately priced and perhaps under priced for the quality and level of technology it represents. However if you want to really test its possibilities, carbon limbs are neither cheap nor easy to find. One archer I know has a fully tricked out Diablo that cost almost as much to put together as a top line custom bow.

It is sold for both hands.

The Martin Diablo is a modern technically advanced bow that makes the most of its draw weight to deliver more energy to the arrow than older bows. It is a faster bow with a longer range than other bows of the same draw weight.

It will work for a beginner and an old hand, though it may be somewhat pricey for a beginner once all the accessories are taken into account. It is a bow that has only been on the market for a year, and that may be it’s biggest con as, if there are bugs, they haven’t surfaced yet, and one can never be sure of the durability of a new technology.

Still the Diablo is a very fast, very powerful bow that can be used in all circumstances from target shooting to hunting.