It is one of the very few production line bows that stacks up well against custom, hand made and Warf bows.  It is not for the beginning archer and only on the fringe of intermediate expertise.

It is a bow for a serious archer and hunter. The 35 pound version can be used as a target bow, however that is not the raison de etre for this bow. The Martin Hunter is made for the hunt, and it is one of the world’s best bows for that.

The Martin Hunter is a precision bow, and as such can be tuned to fit an experienced archer like it was made for him. It draws smoothly and can be counted upon for accuracy as far out as fifty yards.

The Hunter costs almost as much as a custom bow from a top bowyer, which is about its only drawback, and even at that, it’s worth every cent. 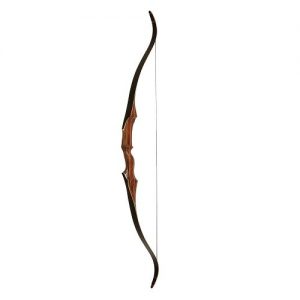 Originally built in 1962, the Hunter has been the top of the line for more than half a century. It is the benchmark for all hunting bows, powerful, accurate, fast and quiet the Hunter has ruled tree stands and blinds since it’s introduction and only custom made bows match its performance.

The limbs are hard Maple laminated to black fiberglass. They are durable and shoot like the arrow was a bolt of lightning. Archers who bought the bow in 1962 are still using it to bag the limit today, with no thought of changing it. And, to be truthful, there is no production line bow made that would be considered an upgrade.

The Martin Hunter’s riser is made of Sheuda and Bubinga with Bubinga at the core mixed with hard Maple and laminated fiberglass flowing down and up from the limbs. Aside from being on the top of the heap as a hunting bow the Martin Hunter is also one of the prettiest bows made.

The Hunter is best used as a hunting bow although some archers also swear by it on the range. Once mastered it will produce tight groupings as far out as fifty yards.

The Martin Hunter is a hand made bow, it is considered a production bow because it is not custom made for a particular archer. It is carefully crafted and one of the highest quality bows currently on the market.

The Martin Hunter is priced only slightly less than a true custom made bow and certainly approaches a custom bow in quality.

Amazon does discount it a bit, and it should be the first place to look.

It is sold for either hand.

The Martin Hunter is the standard for traditional hunting bows and has been so for more than half a century. For many advanced archers it is the bow of choice and it is considered the equal in quality to custom-made bows. It is pricey, but discounts available through such outlets as Amazon may make it affordable.

This is a bow for a serious archer, though it is not a difficult bow to shoot, in fact it is a very friendly and forgiving bow, the price will probably deter a beginner. Of course nothing should stop a committed beginner if he or she wants to start with the best, but it would be a shame to have it ending up stored in the back of a closet, it is made to shoot and few other bows do that as well as it does.